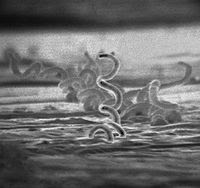 On Columbus Day, it seemed appropriate to feature Treponema pallidum, the bacterium that causes syphilis and other diseases such as bejel and yaws. Why? Because Columbus had syphilis? No...at least not that I know of. The reason stems from another book by Robert Desowitz called "Who Gave Pinta to the Santa Maria?" In this book, Desowitz ponders the exchange of diseases between the Old World and the New World when exploration and colonization by Europeans began. One of these potential continent swaps was Treponema pallidum. Some contend that Europeans brought the bacteria to the New World where it infected people there and mutated to cause not syphilis, but pinta, which is more of a skin affliction. Others argue the opposite- that the voyages to the Americas resulted in the introduction of T. pallidum to Europe, where, because of the colder climate inspiring people to wear more clothing, the bacteria became spread via sexual contact instead. The bacteria found in each of the diseases are almost identical in morphology, serology and even genetically, so it's still somewhat of an open question as to why they sometimes produce one pathology instead of another. Currently, though, most agree that the bacterium that causes pinta is a different species, now known as Treponema carateum, with the others classified as subspecies of T. pallidum.
Posted by Susan Perkins at 6:00 AM