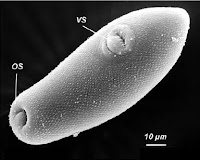 Trematodes are famous for the complexity of their life cycles, but some species demonstrate something beyond all expectations. A good example is Parvatrema margaritense which belongs to Gymnophallidae, a relatively small family of trematodes circulating in coastal ecosystems. As studied in the Bartents and White Seas in Russia, sexual reproduction of this parasite occurs in the digestive tract of the common eider duck (Somateria mollissima). Eggs containing miracidia disperse into the water and the bivalves Turtonia minuta get infected. The cercaria develop in sporocysts, are shed and then seek out and penetrate into the second intermediate host, the gastropod Margarites helicinus. The cercariae occupy the extrapallial cavity of their hosts, lose their tails and form metacercariae. For the majority of trematodes, the latter would eventually be infective for the definitive hosts. However, P. margaritense’s metacercariae are parthenogenetic; they produce the next generation of metacercariae, also parthenogenetic. These subsequently yield mature metacercariae that can continue the cycle inside the eiders. (In addition to these findings, other gymnophallid metacercariae from Sakhalin and the Kuril Islands in Russia were shown to produce cercariae which are capable of re-infecting the host species they originate from, so creating a peculiar sub-cycle).

One cercaria established in M. helicinus can thus give rise to as many as 1.5 – 2 thousand invasive metacercariae (clones). This is about 100 times as many as the number of cercariae shed by a single T. minuta a day, providing a significant multiplication of a parasite. Another curious observation is that metacercariae in the extrapallial cavity of M. helicinus don’t cause any of the common parasite-related troubles and might better be call commensals. The broader exciting discussion on these topics as well as on their evolutionary implications can be found in the referred papers.

Contributed by Anya Gonchar.
Posted by Susan Perkins at 6:00 AM