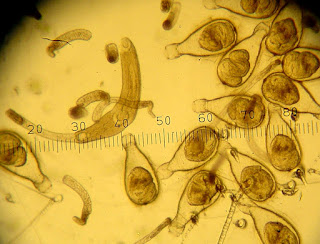 We have featured many parasitic flukes on this blog, and a part of their life-cycle consists of the free-living stage (called a cercaria) being expelled from its mollusc host (where they are produced asexually), and proceeding to infect the next host. There, they form a cyst and wait to be eaten by the final host. But today's parasite, also a fluke, does something slightly different. Unlike most other trematodes that penetrate and embed themselves inside the host's body, Philophthalmus attaches itself to hard surfaces, which just so happen to be objects that are likely to be swallowed by shorebirds - such as the surface of a shellfish. From my personal experience, this tendency also made them a bit of a nuisance in the lab as they tended to stick to pipette tips and the bottom of plastic petri dishes and had to be scraped off (see the accompanying photo).

Not all of the objects that are available for attachment by Philophthalmus would necessarily end up going down the gullet of a bird, however. There is an abundance of small rocks and seaweed in the intertidal environment where Philophthalmus is found - but those are not the usual fare of shorebirds that prefer a more appetising diet of seafood like snails and crabs. A pair of scientists from University of Otago set out to see if Philophthalmus shows preferences for certain types of substrates. First, they surveyed and calculated the exposed surface area of various objects on the mudflats (such as snails, crabs, seaweed, rocks, etc), then estimated the number of Philophthalmus cysts that would be expected to be attached to each of them if the cercariae just distributed themselves evenly across the environment and stuck to whatever they come across first. They also did a series of laboratory experiments to test if Philophthalmus cercariae show any preference for specific types of objects.

They found that instead of attaching themselves to whatever that just happened to be laying around, there were a higher number of Philophthalmus cysts on snails than expected given their comparatively small surface area. This makes sense in terms of the parasite's life-cycle as the shell of a live snail is more likely to deliver Philophthalmus to the mouth of a bird than say, bits of rock and seaweed. Additionally, in laboratory experiments, when Philophthalmus cercariae were presented with the type of substrate usually present on the mudflats, they showed a very high tendency to stick themselves to snails, but shunned rocks and the shells of cockles.

So why the preference for snails but not cockle shells? Some birds do eat cockles and for some parasites that is how they complete their life-cycle, but when birds such as the oystercatcher eats a cockle, they usually crack open the valves to swallow the flesh (where the parasites are embedded), leaving the shell behind. Snails, however, are more likely to be eaten whole (with the attached Philophthalmus cysts). Oddly enough, the Otago scientists found very few cysts attached to crabs - which is another staple food for birds. However, a crab tends to go through several molts during its life, and every time it does so, it would leave behind any Philophthalmus cysts which are attached to its carapace, and birds don't usually go around picking up empty crab shells to eat.

It is worth pointing out that it would be equally useless for Philophthalmus to attach itself to the shell of a dead snail. Therefore, it is possible that these cercariae are able to detect chemical cues that allow them to distinguish between dead and live snails. Other cercariae are known to be able to respond to a wide range of stimuli, and there no reason to think that Philophthalmus would be all that different - perhaps that would be the next stage of research into this species...so watch this space (or species as the case may be)...