The 2012 American Society of Parasitology meetings were held July 13-16 in Richmond, Virginia. There were over 150 papers presented and an additional 50 or so posters and being just one person, I obviously couldn't see all of them! Here are a few of the highlights of the meeting from the ones I did see, though. The first talk I saw was my Ron Fayer of the USDA, who studies Blastocystis in livestock. Seems that the prevalence of this parasite can be quite high, but detection methods have improved a lot, making its prevention and control more hopeful. Heather Stigge then gave a nice talk about how digeneans (like this one) choose sites in their frog hosts - apparently no one likes bullfrog mouths! This was followed by another digenean talk by Stephen Greiman, who presented data on pathogenic bacteria being transmitted by these parasites in some cases. At the end of this first afternoon, there was a new feature of the meetings - shorter talks by more junior grad students who presented their ideas and plans for Ph.D. projects in order to solicit some feedback from us sage old members. It was very impressive to me how many of the faculty forewent dinner in order to do this. 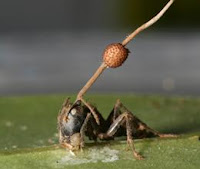 The next morning started rather somberly - it was the final editorial breakfast for Jerry Esch, who has been at the helm of the Journal of Parasitology for 19 years (more on that to come). The President's Symposium followed and that was great fun. ASP President Armand Kuris kicked it off with a summary of the patterns of evolution of parasitism and a search for unifying themes in ecological modeling. His presentation began some debate in that he narrowly defined "parasite" and perhaps prompted a few later speakers to justify why they were at a Parasitology meeting! David Hughes then wowed us with his work on "zombie ants" - behaviorally modified ants who are infected with fungal parasites. It is really elegant, systems-biology-style work that looks at manipulation from many different angles, including ecological, neurological, and phylogenetic. Ryan Hechinger, a former student of Kuris's, finished

up the symposium with a great talk highlighting how large a role that parasites plan in understanding energy fluxes in ecosystems. There were some other nice talks in the afternoon in the parallel sessions. A current student of Kuris, Sarah Weinstein, set the place abuzz when her analyses suggested that parasitism as a lifestyle has evolved 175 times and then a few talks on gregraines by the Clopton and Cook labs set my mind adrift to Dr. Seuss characters. That evening, we held our annual Live and Silent Auctions to raise money to support the student travel grants and once again had a slew of really fun donations by the creative community. Highlights are always paintings that Bill Campbell has done - they fetch hundreds of dollars - but Kristin Jensen's felted iPhone and iPad covers have also grown in popularity (and I was thrilled to win one again this year!). The high-drama auction item of the night turned out to be a pair of hand-painted wine glasses with snails and cercariae, done by author and artist (oh, and parasitologist), John Janovy, Jr.
Posted by Susan Perkins at 10:13 AM