Sunday morning started off with the Associate Editor's symposium, a fairly new feature of the ASP meetings where 3 of the associate editors of the Journal of Parasitology give talks about their own research. Ramon Carreno began and talked about his work on the pinworms of arthropods - people went crazy over these beautiful worms (I know, we're weird folk). Ash Bullard then showed us the results of his recent work following up on the effects of the Deepwater Horizon oil "spill" on parasite fauna. For most types of parasites, there wasn't a significant difference, but for a few, oiled sites had more and for a few others, oiled sites had less. The symposium concluded with my AMNH colleague, Mark Siddall, up on a soapbox about doing 'omics studies of parasites and asking folks to collaborate to get more genomes and transcriptomes of parasites as they represent a lot of phyla that we don't have reference genomes for. Armand Kuris later gave his presidential address, this time talking about humans as parasites and describing patterns across the globe. I headed to the taxonomy and systematics talks for the afternoon, which included the one given by my grad student, Bryan Falk. 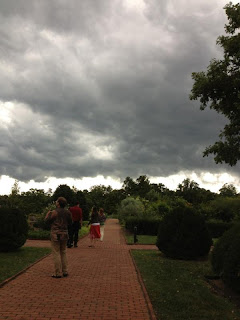 That evening, we had our banquet at the Lewis Ginter Botanical Garden. Though the clouds were horribly menacing, soon we were all eating and drinking merrily. As the desserts rolled out, there was suddenly a toast -- er, a roast! -- of Jerry Esch, our out-going editor.

The meeting wrapped up on Monday with another session of taxonomy and systematics for me, including several talks by folks from Gerardo Pérez-Ponce de Leon's lab from UNAM who I met while visiting last fall and then my talk, where I talked about a way to eradicate Plasmodium falciparum - taxonomically, that is. Posters were presented over lunch and then we headed into our business meeting. Lihua Xiao of CDC recapped his childhood in China and how it prompted him to have an interest in parasitology and then, as an introduction to Bill Font's acceptance of the Mentor Award, Charles Criscione and Michelle Steinauer did a little skit comparing him to Yoda - complete with voices.


Looking forward to seeing everyone in beautiful Quebec City in 2013. If you're interested in joining the American Society of Parasitologists, click here.
Posted by Susan Perkins at 5:13 PM