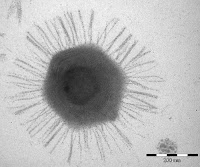 Mimivirus is part of the Mimiviridae, a group of "giant viruses", which compared with viruses most people are for familiar, with such as influenza virus, HIV, or Ebola virus, are unusual in many ways. In fact, mimiviruses are so different that they challenge the traditional concept of a virus and even the definition of life itself. Measuring 400 - 800 nm in diameter, mimiviruses are the giants of the virus world. Their viral particles themselves are unusually large and complex and this complexity is also reflected in their genome which is huge for a virus. Their genomes contain 1.18 million basepairs, which is more than 600 times larger than the genomes of any of the viruses named above, but also even larger than many bacteria (e.g. Treponema and Chlamydia). And unlike "normal" viruses, which only have a few genes (e.g. 9 genes in influenza), mimivirus has more than 900 genes and many are genes that otherwise have only been seen in cellular organisms. The strain of mimivirus in this context infects Acanthamoeba spp, which are free-living, bacteria-eating amoeba, commonly found in soil and freshwater habitats.

Contributed by Tommy Leung.
Image from this site.
Posted by Susan Perkins at 6:50 AM

Email ThisBlogThis!Share to TwitterShare to FacebookShare to Pinterest
Labels: virus