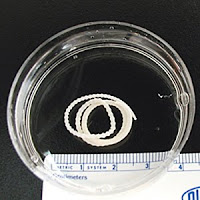 Moniliformis moniliformis is an acanthocephalan, or thorny-headed worm. Like others in this group. M. moniliformis alternates between two hosts. The first is usually an insect such as a cockroach or a beetle, and then the definitive host is often a rodent such as a mouse or rat. Janice Moore and colleagues have used M. moniliformis to conduct a variety of studies on the manipulation of host behavior and have found that some cockroaches that are infected with M. moniliformis move more slowly, though other cockroach species do not have detectable changes in behavior. Humans can become infected if they ingest the intermediate hosts accidentally (but so far there is no evidence that they turn into couch potatoes who like dark rooms.)
Posted by Susan Perkins at 6:49 AM