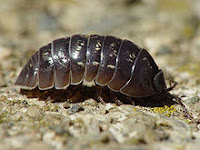 Often times endoparasites will alter the behavior of a host to complete their lifecycles. The acanthocephalan, Plagiorhynchus cylindraceus, is a common parasite of songbirds in North America, typically robins (Turdus migratorius) or Europeans starlings (Sturnus vulgaris). While inside the bird, the worm produces eggs that pass out in the bird’s feces and are consumed by pillbugs (Armadillidium vulgare, shown in photo), the main intermediate host. This worm is capable of activating a suicidal behavior in the pillbugs to propogate its own lifecycle. Once infected with the acanthocephalan, the pillbugs become more active and frequent uncovered, light-colored areas on the forest floor while avoiding hiding underneath objects, such as leaves. By exposing themselves, the pillbugs are more likely to be eaten by a predator, such as robins or starlings. Once consumed by the bird the worm is free to reproduce, thus completing its lifecycle. Pillbugs are not the only animals to become infected with this worm. Some North American shrews (Soricidae) have been found with these worms encapsulated in their intestinal mesenteries, although this becomes a dead-end for the parasite because it cannot be passed on to a songbird from the shrew’s intestines. The proboscis of this parasite has many hooks that it imbeds in the host’s intestinal walls and prevent it from passing through with a host’s meal. Nutrients from such a meal are absorbed through the body surfaces of the parasite; the only way the worm receives nutrition since it lacks a gut tract.

Contributed by Anna Phillips.
Posted by Susan Perkins at 10:28 AM