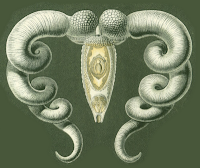 Bucephalus polymorphus is a species of digenetic trematode (fluke) that alternates between freshwater mollusks and then usually two species of fish as its hosts. The first fish host is mostly a transport vehicle - the parasites encyst under the scales and wait for this fish to be eaten. Heavy infections in the bivalve host can induce castration, which is great for the parasite, as it usually causes the mussel to live longer - and thus allows the parasite to produce more offspring. These parasites are natural "enemies" of zebra mussels in their native ranges, but does not appear to have invaded North America with these bivalves. Although a natural control agent would have its plusses, there is concern that the infection of native fishes by these parasites might be a very unwanted side effect.

Photo from Wikipedia
Posted by Susan Perkins at 6:00 AM