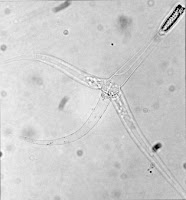 Fishermen are probably familiar with this parasite, which causes whirling disease in trout and salmon. These parasites, which belong to an enigmatic group known as Myxozoa, alternate between tubifex worms and the fish. The parasites in the worm release triactinomyxon spores into the water. These are not passive little cells just waiting to be eaten, though - oh no, these spores are a parasite-injecting machine. They can swim through the water to find a fish host, and then will discharge a coiled filament, which produces a hole in the fish skin and allows the parasite to enter. They will migrate through the fish, eventually coming to reside in the cartilage surrounding the brain. There they cause both skeletal and neurological damage, which frequently results in abnormal movement and behavior - the whirling for which the disease is named. When the fish dies either from predation or other causes, the parasites are released into the water to go find new worm hosts. The origin of this group has been controversial - though single-celled, some morphological and genetic data have placed these parasites as closely related to cnidaria (e.g. jellyfish), while others have suggested that they may actually be bilateria.
Posted by Susan Perkins at 6:00 AM