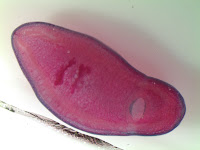 This is a metacercarium of a Clinostomum species that was found encysted in the fin of Perca flavescens, the yellow perch. The definitive hosts of these trematodes are fish-eating birds and reptiles, and adult clinostomes are commonly found in the mouth and esophagus. Eggs of Clinostomum are shed in the feces, hopefully in the water. Miricidia then infect planorbid snails. Cercariae released from the snails penetrate the skin fish and amphibians (the second intermediate hosts), encysting as metacercariae throughout the body. Definitive hosts become infected when feeding on infected fish. Clinstomum metacercaria are often large and yellow in appearance, thus their presence is often called “yellow grub disease”.