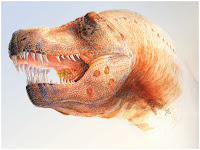 There's certainly no doubt that dinosaurs had parasites. The problem is, soft-bodied things like tapeworms and nematodes, let alone smaller things like trypanosomes or malaria parasites just don't fossilize well, so actually being able to say which species of parasites the "terrible lizards" might have been infected with is close to impossible. Recently, though, jaw bones from Tyrannosaurus rex specimens were re-examined and lesions in them were attributed to a parasite that continues to plague modern-day birds, Trichomonas gallinae. These single-celled parasites, closely related to the human STD, Trichomonas vaginalis, produce "cheesy" lesions in the mouth, pharynx and crop of birds such as pigeons, chickens, and your soon-to-be Thanksgiving turkey, causing a disease that is sometimes called "canker". These birds acquire the infection through consumption of contaminated water, but avian predators, such as falcons, can also be infected from eating parasitized prey. The authors of the paper that makes this link between lesions and T. gallinae hypothesize that even the Field Museum's famous "Sue" may have died of starvation as a result of this parasite damaging its mouth so badly. The image is an artist's vision of what the parasitized dino may have looked like. (Click on the thumbnail to get a better look and see the "cheesy" lesions in its mouth and check out this site for pictures of the parasite in pigeons.)
Posted by Susan Perkins at 6:00 AM