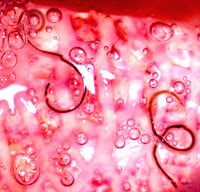 Our parasite for today is a nematode called Pneunonema tiliquae and it is the only species within its genus. It is found in the lungs of the Eastern blue-tongue lizard (Tiliqua scincoides), a cute-looking skink from Australia which can grow to 30 cm (about a foot) long or more. Nothing is known about this parasite's life-cycle or how it enters the host. Based on what is known about other species of lung-dwelling nematodes in reptiles, it is likely that the blue-tongue lizard becomes infected through the oral route, when infective larvae in the environment are accidentally ingested by the lizard alongside its food.

A second parasite found by Tommy Leung in a roadkill skink he found. Click here to see the first.
Posted by Susan Perkins at 6:00 AM