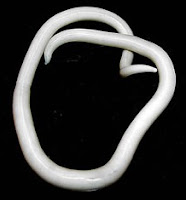 Adult Ascaris lumbricoides, the most common nematode parasite of humans, live in the small intestines. Their eggs are passed in feces, with those finding their way into contaminated food capable of infecting new unwary diners. Once eggs are swallowed, stomach acid and bile release the larval worms in the small intestine. You might think that they’d be sensible and just grow up there, completing the infection cycle. Nope! The larval worms leave the intestine, burrowing through the mucosa and get picked up by circulating blood. Those that don’t get lost in random tissues are carried to the lungs where they break out into the alveolar spaces, migrate up the trachea, or are coughed up, whereupon they are swallowed and arrive right back where they started, growing up to become reproductive adults in the small intestine - not unlike going from the White House to the Capitol Building via a side trip to Philadelphia!

As bizarre as their migration might seem, there also are bizarre human stories surrounding these amazing worms. In 1922, Shimesu Koino ate 2000 eggs of Ascaris lumbricoides, and fed 500 Acaris suum eggs from pigs to his younger brother! Koino didn’t fare so well, but he did demonstrate the pulmonary syndrome associated with early Ascaris infections. He also inferred the route of migration by finding larvae in his sputum. In 1970, annoyed that his roommates were bugging him to pay his rent on time, a postdoc at McGill University in Montreal, Eric Kranz, laced their food with hundreds of thousands of Ascaris lumbricoides eggs that he had taken from the parasitology lab at Macdonald College. Richard Davis, William Butler, David Fisk, and Keith Fern were each hospitalized and Kranz was charged with attempted murder. Ascaris eggs are extremely resistant to destruction; they remain viable for months to years. In 1920, Yoshido even demonstrated their ability to remain viable in the face of hydrochloric, acetic, and nitric acids or even after they’ve been immersed in formalin – a real danger for biology classes that incorporate dissection of Ascaris in their studies.

Adult female Ascaris lumbricoides have a strong tropism for tight curved spaces that mimic the curved tail of males they must seek out in order to be fertilized by unusual, crawling amoeboid sperm. Alas, this predeliction has more than once revealed an otherwise asymptomatic infection when a female alarmingly crawls her way out through a victim's nostril!

Contributed by Mark Siddall.
Posted by Susan Perkins at 7:41 AM