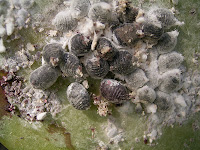 Dactylopius coccus, commonly known as cochineal, is a scale insect (a sternorrhynchan, like the aphids), which is widely used in the fashion industry. These insects produce carminic acid, which, when combined with aluminum or calcium salts, is used to make carmine dye. D. coccus is native to Mexico and South America, where the females are parasites on cactus plants in the genus Opuntia. Only the male D. coccus insects have wings. The juvenile stages of D. coccus, the nymphs, disperse using long wax filaments that allow them to parachute in the wind (much like many spiders do with silk). Ever since the time of the Aztecs and Mayans, people have been harvesting these insects for their red pigment. The scale insects are collected from the cacti, boiled in water and allowed to dry thoroughly. For pure carmine, a more involved chemical process is used, whereby the pulverized insects are boiled in ammonia and then the red salts are precipitated with alum. In colonial times, Europeans began to use carmine dye as well, particularly to make fabrics, including those of the British “Redcoats”. Although synthetic red dyes were used for a time being, their link to cancer and expense to make has led to a resurgence in “natural red coloring” – in other words, for carmine dyes derived from D. coccus. It is widely used in the U.S. as a food coloring, but is also used as a fabric dye and as a pigment to make cosmetics such as lipsticks and blushes. Check the ingredients label the next time you eat something red or use make-up – chances are, you’re enjoying a dye derived from a parasitic insect.
Posted by Susan Perkins at 7:34 AM