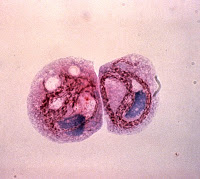 In 1976, the nation celebrated the American bicentennial. One event, a convention of members of the American Legion in Philadelphia, had tragic results that led to the discovery of a new pathogenic bacterium. In the weeks following the convention, over 200 people became ill and 34 of them died, triggering public health officials to track down the unknown culprit. The guilty party was Legionella pneumophila, a Gram-negative, rod-shaped bacterium that is both an intracellular parasite of protists (like the ciliate shown here - the long red bits that look like yarn are chains of bacteria inside these cells), and also free-living in the environment, particularly warm, wet places like air-conditioners at convention centers and saunas. People acquire the bacteria when they breathe in vapor containing them, but the disease cannot be spread from person to person. For some, particularly elderly people, people with weak immune systems, and smokers, the bacteria can present a very serious health problem in the form of pneumonia. For others, a milder infection produces what has come to be called "Pontiac fever", named for a similar outbreak that occurred (in all places, amongst county public health department employees) in Pontiac, Michigan eight years before the Legionnaire's convention of 1976. At that point, they could not find the pathogen, but were later able to tie those cases to Legionella pneumophila.

Image from the CDC Public Health Image Library.
Posted by Susan Perkins at 9:05 AM