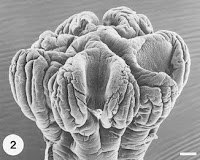 Up until the point at which this parasite was found, tapeworms in the group Proteocephalidea were thought to only infect fishes, amphibians and reptiles. But, in the late 1990’s, these cestodes were found in black-eared opossums in Veracruz, Mexico. The authors erected a new genus for these tapeworms, calling it Thaumasioscolex, from the Greek “thaumasio” which means “to surprise” because of its presence in a mammal and then described this single species in that genus, Thaumasioscolex didelphidis. Molecular data were consistent with the parasite’s relatedness to members of the Proteocephalidea that infect fishes. The life cycle is not yet known, though aquatic intermediate hosts including crustaceans and frogs are suspected.
Posted by Susan Perkins at 7:22 AM