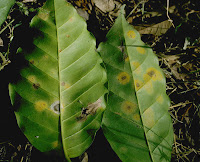 Monday mornings would be impossible without coffee, so I have a real issue with this parasite, known as Hemileia vastatrix, or coffee rust. This species of fungus attacks the leaves of the coffee plant (Coffea arabica), but not the fruit or other parts. It was first discovered in East Africa, but since then has spread to most of the other major coffee-growing regions of the world, such as Java, and Brazil. This parasite, in fact, might get some credit for the fact that Brits now drink so much tea. In the 1870's and 1880's, an epidemic of coffee rust essentially destroyed coffee production in many parts of Africa and Asia, including many countries that were British colonies. Some places, such as Sri Lanka (then known as Ceylong) upped their tea production instead.
Posted by Susan Perkins at 6:00 AM