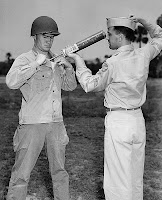 On Memorial Day, we honor the many soldiers who fought for our country. While bullets and other forms of arms are certainly the primary concern for soldiers at war, diseases that are spread under the conditions of warfare have taken their share of casualties as well. One of the most important ones, from the times of the Peloponnesian Wars in ancient Greece up through World War II, was epidemic typhus, caused by the bacterium, Rickettsia prowazekii. The bacteria are transmitted from person to person by the human body louse (Pediculus humanus humanus) and causes high fevers, rashes, headaches. muscle pains and delirium. Typhus has played a major role in history: the disease killed more of Napoleon's soldiers than the Russians did and then in World War I, over 3 million Russians died from typhus. The disease was rampant in Nazi concentration camps - both Anne Frank and her sister died of it.

The photo, from Wikipedia, shows two soldiers demonstrating a DDT gun, which was used to kill lice.
Posted by Susan Perkins at 6:00 AM