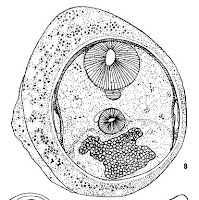 I didn't intend to do this, but the parasites so far this week have all started with "P" - so let's keep that up! This is Plagiorchis vespertilionis, a trematode fluke. These parasites have complex life cycles which go from snails to insects such as caddisflies or dragonflies and then eventually make their way to insectivorous bats when they gobble these bugs up. A recent paper reported a case of this parasite in a Korean man, but how this individual became infected is not clear. The man did not admit to eating dragonflies, nor being an Ozzy Osborne impersonator, but he had recently eaten raw freshwater fish (this is never a good idea, by the way...). Thus, either there is convergence between a species that looks a lot like P. vespertilionis and one that is found in fish, or the host use patterns of this parasite are much more general than originally thought.

The image is from this paper, which named a subspecies of the parasite in American bats.
Posted by Susan Perkins at 6:00 AM