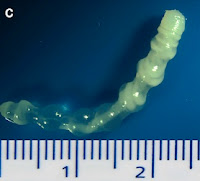 Cultural practices sometimes cause harm, such as when they threaten rare species - or, in this case, exposing a person to a dangerous parasite - like this one. Armillifer agkistrodontis is a pentastomid "worm" (we'll come back to that) that naturally cycles between snake and rodent hosts. The serpent host, Agkistrodon acutus (or the "hundred-pace snake" due to its highly venomous nature) will house adult pentastomids in its respiratory tract. The parasites lay eggs, which get into the environment and are subsequently consumed by rodent hosts. The eggs hatch in the rodent's small intestine and then become larvae, which migrate to the liver or spleen. Snakes become infected when they eat a parasitized rodent. Chinese cultural practices and medicine, however, sometimes involve either the consumption of the pitvipers or their gallbladders or the drinking of their blood. And that can open the door to a pentastomid infection in humans. These occurrences are very rare, luckily.

Above, I put "worm" in quotes. That's because even though pentastomids have very worm-like bodies, their phylogenetic affiliations are not with any real worm groups. Although in the past they've been placed in Nematoda, Annelida, Platyhelminthes (your classic worm clades), modern phylogenetic analyses have instead supported their relationship within Arthropoda.

The photo comes from this paper.
Posted by Susan Perkins at 6:00 AM