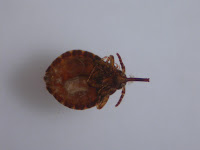 The same species of louse, known as Haematomyzus elephantis, is found on both Asian and African elephants. Although it seems like a bizarre coincidence that this parasite should have a long “proboscis” like its host, the length of its mouthparts is an adaptation to penetrate the thick skin of the elephant. And although the ”proboscis” might also look like a giant straw to suck blood, these are not sucking lice (Anoplura) but chewing lice (Mallophaga), which feed on the epidermis. They are so highly evolved that an entire suborder (Rhynchophthirina) was created for only 3 species (the other 2 are found on warthogs).