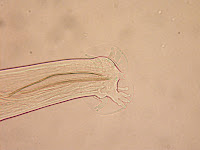 This parasite is a good example of how being in an abnormal host can sometimes do much more damage than being in a normal host. Angiostrongylus costaricensis is a nematode which is usually found in cotton rats (Sigmodon hispidus) and other small rodents where it dwells in the mesenteric veins lining the intestines. Eggs are deposited into the tissues and hatch into first stage larvae which penetrate the intestinal wall and pass out in the feces. When the larvae are ingested by snails or slugs, they again penetrate the tissues and molt twice to infective third stage larvae. If the gastropods are ingested by a cotton rat, the larvae migrate to the veins and the cycle is complete. But if the gastropods are ingested by a primate, such as a person, the consequences can be severe. The first stage larvae in the intestinal wall can trigger a massive inflammatory reaction, resulting in the thickening of the wall and even intestinal blockage. The symptoms can mimic intestinal problems such as appendicitis and occasionally even lead to surgical removal of part of the intestine. Although the distribution of this nematode is primarily in Central and South America, an infection was recently found in primates in two zoos in Miami and opossums and raccoons were also found infected on the zoo grounds.

The photo shows the tail end of a male nematode with a bursa supported by small rays and two chitinized copulatory spicules.