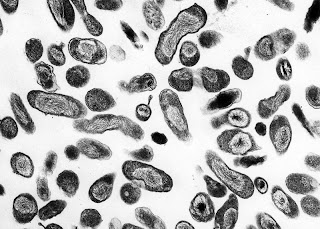 Previously we met Quahog Parasite Unknown or QPX. Today’s parasite also had a mystery name for a while. In the 1930’s slaughterhouse workers in Australia began to come down with a combination of many symptoms that resembled flu, but sometimes progressed to pneumonia and if still left untreated, went on to induce endocarditis – an inflammation around the heart. At first it was unknown what the etiological agent was, so they simply called it “Q fever” with the “Q” standing for “query.” The actual pathogen, a bacterium that was isolated and pegged as the guilty party. The history of its naming is rather convoluted as well. A Japanese researcher in the 1920’s had found a bacterium in ticks that was capable of passing through filters and he published it, but since his samples did not survive, when the Australians Derrick and Burnet and Americans Cox and Davis found similar organisms, they could not be sure if it was the same organism or not (this is why one must have type species for new descriptions!) Thinking it was a close relative of Rickettsia, the Americans proposed the name Rickettsia daiporica, because if they named it after either of the discoverers, that name would be sunk if the Japanese one were to be found to be the same species. The Australians, not so worried about losing out on having their names on a bacterial species, proposed Rickettsia burnetii. More investigation revealed that this bug was not a Rickettsia and so first a subgenus and then a whole new genus, Coxiella, came into play, honoring one American and one Australian microbiologist.

C. burnetii can be found just about everywhere in the world, but the symptoms can differ geographically. Livestock animals are believed to serve as reservoirs and it has been demonstrated that several species of ticks can transmit the bacteria from one animal to another. Humans can become infected when they inhale the bacteria in dust, ingest meat or milk from infected animals or come into contact with blood or other fluids.

In the 1950’s, the U.S. developed weaponized C. burnetii , partly because it takes such a small inoculum to begin an infection and because it is extremely resistant to heat, dessication, and even disinfectants. (The U.S. ended this bioweapons program in 1969.)
Posted by Susan Perkins at 8:13 AM