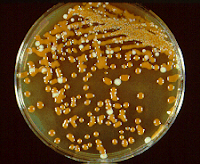 The last parasite from "Whale Week" is Cryptococcus gattii, which both infects whales and dolphins, but also has been all over the news lately because it has been spreading across the Pacific Northwest and killing people as well. Thought to be native to the tropical regions of Australia, South America, and Africa the fungus invaded western North America (perhaps via a eucalyptus?) in the mid- to late-1990's and has worked its way as far south as Oregon now. Several whales and porpoises have been found to be infected, though how the fungal spores make their way to those marine creatures remains a mystery. Other animals such as dogs, cats, ferrets, llamas, and alpacas have also tested positive for the fungus. The recent deaths of 5 people in the Pacific Northwest have been creating a bit of a panic, but doctors and news agencies have been warning people to relax and not change their habits. Like other fungal infections, C. gattii cannot be spread from person to person.

A good paper on the recent outbreak in the U.S./Canada can be found here and if you'd rather listen than read, the CDC has a podcast here.

Photo is from this site.
Posted by Susan Perkins at 6:00 AM