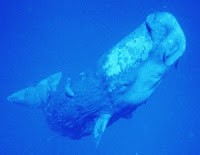 The parasite featured today is the longest known parasitic nematode, appropriately, its host is also one of the largest known living animal - the sperm whale (Physeter macrocephalus). The name of this parasite is Placentanema gigantissma, and it is indeed a gigantic worm. The female worm can reach up to 8.4 m long, while the smaller male reach "only" 3.75 m in length.

Its scientific name also indicates its peculiar microhabitat - this nematode has only ever been found in the uterus and placenta of female sperm whales. Even though they are relatively common, very little is known about this species. How this parasite transmit from host to host is currently unknown, though it is likely that this is facilitated by the expulsion of the placenta (with the female worm within) at birth, and eggs are released as the female worm decomposes. It has been suggested that larval worms infect the female whale prior to sexual maturity and remain dormant until the whale becomes pregnant.

The photo is of the host, in this case a young sperm whale.
For further details, see p. 839 of Diseases of Marine Animals Vol 4 Part 2 (free to download from here)

Posted by Susan Perkins at 6:00 AM