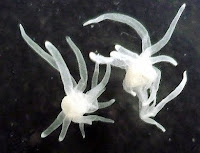 Now here's a parasite with an expensive taste - Polypodium hydriforme. The exact taxonomic affinity of this parasite is presently unclear, though it appears to be related to jellyfish. Part of the life-cycle of P. hydriforme involves the parasitic larval stage developing in sturgeon eggs - yes, the sturgeon eggs that most people are familiar with in the form of black caviar. As the parasite grows, it consumes the content of the sturgeon egg and develops into a "stolon" which is made of a chain of multiple individuals or "bud" - each bud will grow into an individual P. hydriforme. There can be as many 30-40 buds contained within each egg, with larger eggs containing up to 100 buds.

Just prior to the sturgeon spawning, the parasite prepares itself for the transition from its parasitic to its free-living stage. It accumulates all the remaining yolk within the egg into its gastric cavity, which will act as its energy reserve for the first 6-8 days of its non-parasitic life. After this reserve is depleted, P. hydriforme develops a mouth and begins feeding on various tiny benthic organisms such as Tubifex worms (what you might feed your aquarium fish), free-living turbellarian flatworms, and rotifers. Once it reaches sexual maturity, it mates to produce the next generation of larvae which will then infect the eggs of another sturgeon - however, just exactly how the larvae manage to accomplish that is still presently unclear.

The peculiar life-cycle of P. hydriforme not only makes it one of the few (if not the only) known species of parasitic cnidarian, but also one of the few multicellular organism that has evolved to be an intracellular parasite (another notable example being the nematode Trichinella spiralis which enters muscle cells and converting it into a "nurse cell").

Contributed by Tommy Leung.
Posted by Susan Perkins at 12:01 AM