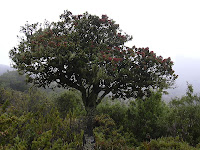 Parasites often exact a heavy toll on their hosts in ways that we are all familiar with. For example, in a recent video, New York Times columnist Nicholas Kristof marveled at the crushing physical labor performed by Congolese women with heavy parasite loads. Malaria is among the deadliest diseases, infecting up to 500 million people each year, causing untold suffering and millions of deaths.

In a twist on this theme, a much-beloved parasitic plant, sandalwood, has played an important and unexpected role in human suffering. I know a native Hawaiian woman whose grandmother ripped young shoots of native sandalwood out of the ground whenever she encountered them. That plant had caused her own grandparents so much pain that she never wanted her people to experience it again.

The name sandalwood refers to any of the 15 extant described members of the genus Santalum L. of the Santalaceae, a large family of parasitic plants that includes mistletoe. Santalum has a distribution ranging from India through Southeast Asia, Australia, and across the islands of the Pacific. It is a culturally and economically important group, and its members are hemiparasitic root parasites. This means that they use a modified root called a haustorium to physically penetrate the roots of neighboring plants, thus diverting water, inorganic, and organic nutrients to themselves. Hemiparasitic means that these plants are also capable of photosynthesis themselves, unlike holoparasitic plants that mostly lack chlorophyll.

The natural oils of sandalwood bear odors that are among the most sought-after in human history. The scent is distinctive and soothing, and items carved from sandalwood can perfume a room for decades. Many ancient texts mention sandalwood, and it has been an important trade item for millennia.

Hawaii has four endemic species of sandalwood that have important traditional uses in native culture. When Europeans recognized the value of these trees (called `iliahi in the native Hawaiian language) in the late 18th century, a massive deforestation program began, fueled in large part by labor forced on native Hawaiians by their chiefs and king, who enriched themselves in the process. The ecological effects linger: sandalwood is rare in Hawaii. The social effects are made clear in this passage:

Within a few years the supply of ‘iliahi began to dwindle. This contributed to the decline of the Hawaiian population. The work in the damp uplands combined with near starvation conditions and the scourge of the white man's diseases wiped out large numbers of the native Hawaiians.

In 1827 the first written tax law in Hawaii imposed a sandalwood levy.

Every man is required to deliver a half picul of good sandalwood [a picul being 133 lbs.] to the governor of the district to which he belongs, … No person, except those who are infirm, or too advanced an age to go to the mountains, will be exempted from this law.

And so it is easier to understand the visceral reaction of my friend’s grandmother, trying to eradicate this hated plant that she thought had harmed her ancestors. The Hawaiian sandalwoods have never regained their former abundance, with one variety federally listed as endangered and two as threatened. Recent molecular work has shown that these four species are likely the result of two separate colonization events of Hawaii 1 to 1.5 million years ago from the original Santalum homeland in Australia.
If you are a fan of essential oils, remember that the soothing scent of sandalwood has a fascinating natural and cultural history, and is a lovely product of parasitism.
Posted by Steve Jordan at 12:01 AM